How An Exploding Tooth Made Me Confront My Own Classism

Teeth are inseparable from class in this country. Image: Thinkstock.

I didn't have my first cavity until the age of 9, and that was in a baby tooth that I lost a year later, to be replaced by a shiny new adult tooth.

My mother won't thank me for talking about her teeth on the internet, but she did not have the same excellent start that I had, and she suffered for it later. I remember her saying, “Don't take your teeth for granted.”

But I totally did.

In the United States, teeth are a symbol of class. Those with means have their teeth cleaned professionally twice a year, have their children's teeth straightened, and are able to keep their pearly whites, well, pearly and white.

Those without such means often suffer from various tooth-related problems.

Until just a couple of years ago, state-funded health insurance in my state didn’t include ANY dental coverage. A friend once posited that this was a system feature, rather than a flaw.

Preventing kids living in poverty from accessing dental care maintained a status quo where you could tell, just by looking at someone's smile, if they grew up poor.

When I got that first cavity, I was so embarrassed; I didn’t want anyone to know. When the tooth fell out, I resolved to forget all about it, and go on living my life with really great teeth.

Then, in my early 20s, I lost the limited dental insurance that I had previously enjoyed.

I was in the shower when I felt it, a strange, gross, sensation. I screamed, and my wife came running, leaping over the baby gate in the living room, probably certain that I had finally fallen on our slippery tub and hurt myself.

But I wasn’t hurt, not exactly. Instead, my upper right wisdom tooth had basically exploded and then crumbled. I was standing there, spitting out pieces of broken tooth and wondering why the hell it didn’t hurt more.

The thing that I had been avoiding for a decade was suddenly unavoidable: My teeth were going to shit.

I was disgusted by my own mouth, and embarrassed that I had let this happen to myself. It didn’t hurt that day, and it was a Saturday anyways, so trying to do anything about it seemed futile.

But by the next night, I was in a shocking amount of pain.

So, this is what happened, as far as I can understand: My wisdom tooth grew in sideways.

As in, it was completely sideways, with what should have been the bottom of the tooth pointing toward the inside of my cheek. Because my mouth was already overcrowded, and because of it’s weird position, it was basically impossible to get a brush back there to clean it well. 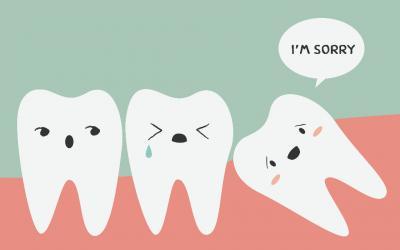 Navigating medical systems and dental systems as a low-income person is not easy. There are so many other poor people trying to access care providers who are overwhelmed and impersonal. The logistics involved are often complicated and the rules are not easy to find. All of that adds up to spending literally three whole days trying to get the tooth looked at.

But I tried. I tried for years, because for years I didn’t have dental insurance and lived paycheck to paycheck. And then, in my 20s, lulled into a false sense of security by a lifetime of having basically “good teeth,” I got lazy with my brushing routine.

And then last year I had a baby. During the pregnancy, brushing my teeth made me throw up nearly every single time.

I can remember two whole times when I brushed my teeth without puking.

I remember them because they were exciting and noteworthy.

I have a pretty severe phobia of vomiting, and I also needed to keep at least some food down, so I started brushing my teeth less and less often, and less well when I did.

All the while, I was doing anything that helped with the nausea.

Things like keeping a sour candy in my cheek… right next to that damn tooth.

To say it developed a cavity is an understatement.

That Sunday night, I tried to brush my teeth before bed. It felt like there was food stuck in the offending tooth, so I told my wife to wish me luck while I attempted to clean it.

She raised her eyebrows at me.

I sobbed in pain and spit out brown chunks of tooth that looked like wood.

The jagged edge where the tooth was broken off cut my inner cheek like a serrated knife.

Navigating medical systems and dental systems as a low-income person is not easy. There are so many other poor people trying to access care providers who are overwhelmed and impersonal. The logistics involved are often complicated and the rules are not easy to find.

All of that adds up to spending literally three whole days trying to get the tooth looked at.

When I finally do, at the low-cost dental school clinic, I am paired with the most awkward dental student imaginable, Janice*. It is then — as Janice encourages me to “Just get comfy!” in the dentist chair, compliments me on the spelling of my first name, and chuckled softly to herself that she was only becoming a dentist so that people would fear her — do I realize that I am afraid of the dentist.

She cycles between making uncomfortable small talk (“Oh, my sister is trying to get pregnant right now, so I’m asking everyone I meet about baby names…”) and remarking on my dental situation.

“There’s also a gross amount of decay in the first molar, so you’ll have to have that one out as well.”

To make matters worse, I am embarrassed to be showing this person — who must really, really like teeth or something — my utterly disgusting mouth, full of “gross decay” and brown tooth parts.

I sit there, stewing in self-hatred and fear, and she remarks that my blood pressure was a little higher than they’d like.

When they transfer me to the surgical department (finally, and only after a debate about whether or not they’ll be able to squeeze me in), a distracted young man explains what is about to happen.

He is not patient or kind. He makes casual jokes about hurting me. When he tries to “numb me up” it doesn’t work, and the second he touches the tooth a sharp burning pain shoots through my entire head.

I do what any animal would — I scream.

Somehow, afterward, I find myself apologizing.

“Yeah, thanks,” he says, “’cause you really kind of freaked me out.”

It’s only after two more attempts that he, another student, and a real dentist look in my chart and decide that I haven’t been on antibiotics long enough and that they can’t do this today.

I’ve been thinking about why my teeth are so embarrassing to me, why this whole experience has left me wanting to apologize to anyone who will listen for even having teeth in the first place.

On the walk to my follow up appointment, one week later, I found myself smiling with my lips curled and tightly closed.

Even though the offending tooth was way in the very back of my mouth, I felt I couldn’t risk letting strangers see even my front teeth.

Teeth are inseparable from class in this country. I have gotten by in life largely by being able to “pass” as middle-class, by being white and articulate and confident. People meet me and assume that I must have gone to college. Middle-class people talk to me like I’m their peer.

And even as I write blatantly and honestly about class, it still hurts to have the façade shattered. Because a respectable woman would never let a tooth become so rotted that it crumbles and falls out of her face.

But I am not a respectable woman, and yes, I did that.

When I went back to have the tooth actually removed a week later, more of it had fallen out and the pulp and the nerve were exposed. Even trying to gently swab on topical anesthetic felt like they were trying to kill me.

This time, a patient and friendly dental student apologized for hurting me and gave me time to collect myself as I sobbed and shook from fear and pain.

At the clinic, there is a three-month wait to be fully anesthetized for tooth removal. I would have to be brave even though I didn’t feel brave.

This is what we poor and working class folk do to get by.

Eventually, she mentioned the possibility of laughing gas. “It’s a $15 charge.”

The tooth is out now, but this new embarrassment about my teeth remains.

I have three more wisdom teeth that need to come out “soon” and at least two molars that “aren’t worth trying to save.”

I feel guilty and ashamed about the damage done to my smile in the last decade, and I’m nervous about what’s going to happen next.

I just keep hearing my mom’s voice in my head.

Don’t take your teeth for granted.

I Was Med Shamed By The Only Psychiatrist In Town

Stop Blaming Parents For Our Lack Of Self-Care

Negative Post-Divorce Feelings: One Day They’re Going To Get The Best Of Me

Why People With Chronic Illness Fake Being Healthy

On Ghosting My Ex: I’m The One Who Ended Up Being Haunted

Ask Erin: My Husband Is Abusive & I Think It Might Be My Fault

I Hate Romantic Comedies, So Why Do They Matter?
David Minerva Clover