That Time I Tried To Save White Women's Hairstyles From Extinction

For just 22 cents a day, you can help save their hair from extinction.

It is rumored that White women spent hours in their bathrooms, high from inhaling the fumes of their hairspray, and with cramps in their shoulders and biceps from trying to achieve the perfect metal-god height of hair.

Hey Ravishers! So, I have a joke for you! Did you guys hear the one about the White lady from Hungary* who traveled all the way to Africa to take pictures of seven African tribes near extinction, and then to bring awareness to their plight, she had a graphic designer morph a picture of her into variations of the African tribeswomen she photographed, and then...wait, wait... this is the good part...SHE PLACED HER PICTURE ALONGSIDE THE PICTURES OF THE ACTUAL WOMEN?

Hahaha! Isn’t that hilarious? Isn’t that asinine? Isn’t it sad that it’s not a joke and this really happened? Well, of course I just couldn’t let that slide. I tried really, really hard, but when my five seconds of contemplation were up, well, your girl had to go in.

Ravishers, I present to you: The Time I Morphed Myself Into White Women To Bring Awareness To Their Nearly Extinct Hairstyles.

My name is Adiba Nelson, I’m a 38 year old Black-Latina writer who lives in America and writes about injustices and disparities.

In my new work, I was inspired by the idea of transforming a natural photo of myself into seven different American White women hairstyles, with the help of Microsoft Paint. My inspiration came from my time spent watching a lot of television over the years, and seeing how popular hairstyles have come and gone. I became fully aware of the issues regarding a number of endangered types of White women’s hairstyles, and the speed at which they are fading away. These stunning portraits show how beauty has varied across the decades and prove that all of us are beautiful in a different way. They’re celebrating the stunning North American White women’s hairstyles that are at the brink of extinction. 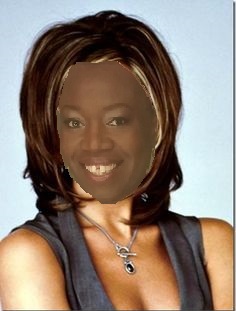 “The Rachel” was the hairstyle of the mid '90s. Short in front and with face-framing layers on the sides, this hairstyle stopped just at the shoulders, perfectly accentuating the wearer's decollete. White women stormed their hair salons, crying, screaming, and DEMANDING the Rachel. It truly was a beautiful hairstyle, but sadly, it slowly faded into the background of American hair culture. Rumor has it you can still find this hairstyle in some strip malls of the Midwest, but for the most part The Rachel has faded into extinction. I pull it off well, don’t ya think? 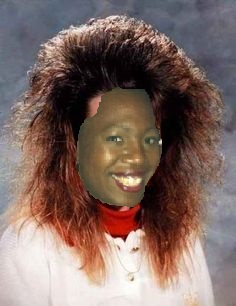 Oh Slayer, what a staple you were for White women in the '80s. Big, ratty hair, teased as far right and as far left as humanly possible, bangs that reached to the heavens, and a copious (read: obscene) amount of Aqua Net aerosol hairspray. It is rumored that White women spent hours in their bathrooms, high from inhaling the fumes of their hairspray, and with cramps in their shoulders and biceps from trying to achieve the perfect metal-god height of hair. While the hole in our ozone is often attributed to this almost extinct hairstyle, it can still be found at Lords of Rock concerts in Missouri, Kentucky, some parts of Tennessee. It is these diehard Slayer hair loyalists that have managed to keep Aqua Net on the shelves of your local grocery store. I’m not sure the style suits me, though. What do you think?

What can I say about this hairstyle that hasn’t already been said? Business in the front, party in the back. Helmet head. Bulletproof Becky. This hairstyle was epic in the '70s and actually crossed over into the '80s, before it lost ground to The Slayer. It allowed White women to go straight from work to the bar on a Friday night without having to make a pit stop. It stood up against wind, hail, sleet, and snow, and if you did it right, there was a real possibility that if it rained, you wouldn’t need an umbrella, either.

This teased mullet was seen everywhere — the classroom, the boardroom, and the bedroom. Could you imagine being able to go from crazy sex straight to a 3:00 Board of Directors meeting? Why did White women ever let this one go? Though it has mostly faded into the background and become part of suburban-housewife folklore, if you sneak around Wal-Mart, you can probably still find a few wandering the aisles, contemplating the virtues of spray can cheese. Personally, I think this one ties for first place with “The Rachel.” Thoughts?

Now Ravishers, I could demonstrate four more now virtually extinct White women hairstyles, but this shit is exhausting. And I’m really bad at Photoshopping, so I’m going to spare you. But I want you to really take a look at what I just did. Yeah, I made a funny, but I also made a point.

YOU CAN’T INSERT YOURSELF INTO ANOTHER PERSON’S CULTURE IN AN ATTEMPT TO DRAW ATTENTION TO THEIR PLIGHT WITHOUT LOOKING LIKE A DAMN FOOL AND A PRIVILEGED, OVERREACHING ASSHOLE.

You just can’t. It’s virtually impossible, as you can see from my piss-poor attempt to bring back popular White women’s hairstyles.

Also, let me end with this. If you read my version of this article and were offended, good. I am not racist. I am as far from that as the tip of my pinky toe is from the surface of the sun. But my job as a writer is to call attention to disparities, inaccuracies, injustice, and daily life as I, and many like me know it. I am a fat, Black-Latina woman, married to a White Jewish man, raising a daughter with special needs and a stepson with mental health issues in a world that says we are wrong in every way possible. My job is to make you feel — whether it’s lust, pride, anger, guilt, joy, sadness.

*The woman to whom I refer has since deleted the aforementioned post. Thankfully.

If you like this article, please share it! Your clicks keep us alive!
Tags
race
racism
Cultural Appropriation

We All Liked Problematic Stuff As Kids, But We Don’t Have To Pass Them On

What Do Interracial Relationships Really Mean To Black Women?

Introducing My White Family To My Black Culture

Stop Telling Me That You Don't See Color ​

A Word To The Brokenhearted
Adiba Nelson

The BET Awards: What Jesse Williams Wants You To Know
Adiba Nelson

Before Lemonade There Was My Life
Adiba Nelson