Set Point Weight: What Is It? How Do I Change It?

A bipolar, body-positive bread enthusiast with a jacked-up ankle and a history of disordered eating chronicles health, weight-loss, and gardening. No diets allowed.

Dieting is so dang alluring. Promises of skinny jeans and before and after shots, new wardrobes and running after your children with the glee and stamina of a three-year-old on donuts. It all looks so magical — right up until you gain back all the weight you lost, plus interest.

I call this the “Diet Cycle Nightmare.” 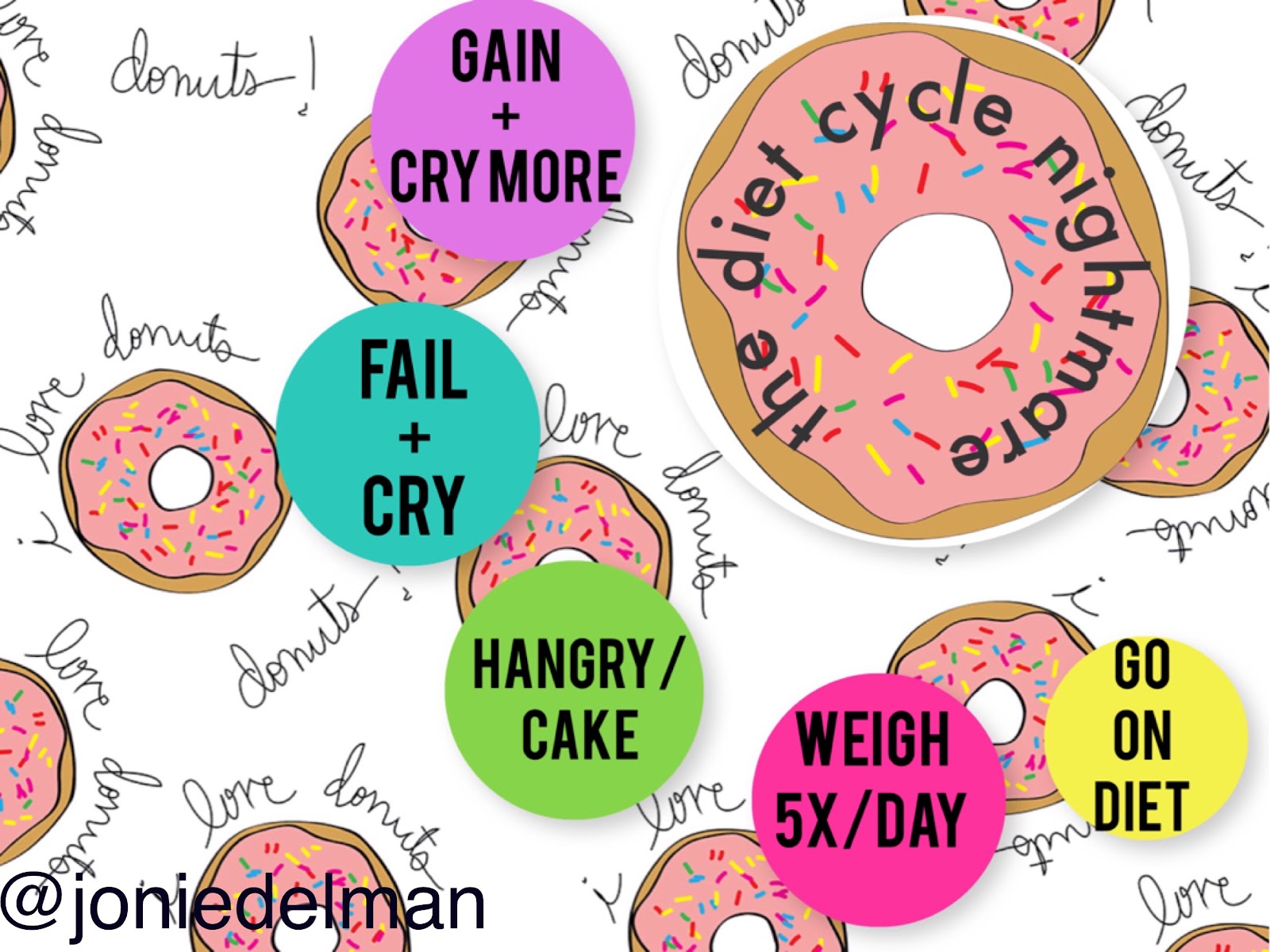 We all know diets don’t work. We know this because science has proven it, but science didn't need to prove it because most of us have experienced the crushing reality that is diet “failure.” We’ve lost the weight, sworn we’d be in the 5% who don’t gain it back, and then watched the scale creep up anyway. We’ve loathed ourselves and our lack of dedication. We’ve cursed our apparent weakness, our poor genetic lot, our love of carbs.

But here’s the thing about this particular kind of “failure,” to your body, this is success.

You didn't fail the diet; the diet failed you.

We diet to lose weight and then when we stop dieting, our bodies go right back to where they were (and often even above that place). This happens every time and every time we are surprised that it happened.

Your set point weight is the place your body likes to chill out; it’s usually a range of about 10 pounds. You might gain a few during the Season of The Cookie, you may lose a few during a prolonged illness, but under normal circumstances (“normal” defined by your behaviors) your body will eventually return to its set point weight.

Beep beep, back the truck up; if I have a set point, why did I gain weight in the first place?

That's a complicated question, but the most simply complex answer is hormones. I talked about this last week. By manipulating insulin and leptin levels, anyone can become fat. Yep. Even a person with a very low set point will gain weight if you pump insulin into them. Keep pumping insulin, and eventually, your body will recognize this as a new “normal.” You will stop gaining weight and will have arrived at a new set point. Presto chango!

You see here, what was my set point, a fairly rapid gain, followed by a relatively rapid loss, with some stability in the middle. You may also see that my body apparently has reached a new set point, which is close to, but not exactly, the old one.

You may also see that I’ve had to replace my wardrobe like four times.

This simplified graphic representation of my size begs the question: how did you, or how do you, help your body find a new set point (without breaking your ankle)? Also, why the holy hell is it so easy to raise your set point, and like the journey to Mordor to lower it?

Your set point is internal, but your behavior can change shift that set point in one direction or the other.

Bless your body; it is waging a constant war to maintain its happy range. Meanwhile, you attempt to push it to lower by dieting. When you stop engaging in the behavior that changed your weight (i.e., dieting or conversely, as in my case, sitting on the sofa a LOT) your body will follow suit and return to where it was, or at least TRY. One weight to rule them all. Or something.

This is why Weight Watchers calls itself, not a “diet, but a lifestyle change" (it is totally a diet). But actual lifestyle change (not just going hungry) works both ways. The “lifestyle change” that resulted in my gain was pretty obviously my broken ankle and the resulting decrease in physical activity (and probably some stress sprinkled on top).

Had I not initiated the second "lifestyle change," I have no doubt my body would have recognized the top of Fat Everest as my new set point. And there I would live, quite happily, except for the immobility, and whatever other shit happened as a result of it.

So, if you’ve gained weight, can you lose it in a way that doesn’t involve radical dieting practices, and ultimately return to your set point?

If you once weighed X and now weigh Z (or conversely W), you didn’t go from X to Z overnight. That change was likely very gradual and influenced by a number of factors, which might include: stress, exercise, sleep, stress, hormonal changes, stress, and yes, food intake (which is more complicated than just calories in vs. calories out because your body is not a calculator ok?), and also stress.

The same is true for resetting of your set point to a lower level. And this is, in a very teeny nutshell, one of the many reasons diets do not work (or at least VERY rarely). You go on a diet; you dramatically reduce your caloric intake in an attempt to manipulate your weight and, it WORKS!

You do lose weight! And you might even lose it very rapidly, which feels like so much success in a world full of rich white dudes telling you fat is the worst thing you can be. But what happens when you stop calorie counting every goldfish cracker? Boom, back to the set point.

Your body is confused.

Your body thinks it’s supposed to weigh in the X to Y range, and you’ve starved it to get to W, is it any wonder it goes right back to X? It’s literally just doing its job. It's trying to keep you alive. That's pretty much the sole function of your body: sustaining life.

It looks like I’ve reached a new set point (which is pretty close to my old set point).

Okay, let’s go to that scary place. You want to lose weight, but you don’t want to diet because diets don’t work and how can you possibly be body positive if you aren’t rejoicing in your glorious rolls of luscious fat. AND OMG EVERYONE IS JUDGING ME. WHAT DO I DO? I’M GOING TO DIE OF DIABETES. That's IT; I’m just going to stop eating forever and start running 50 miles a week. I can live on air and endorphins. It's FINE.

This is why shows like The Biggest Loser are so problematic (well, this and the cruelty part). Take a dozen fat people, starve them until they very rapidly lose weight. Then send them home to the same life they were living before and guess what happens? They go right back to their set point. Their bodies did not fall for that nonsense. It did its job.

But that doesn’t mean that shifting your set point up or down is impossible. It just means you have to honor the internal mechanisms that you can’t see while you’re doing it.

The answer is probably incremental weight loss — no more than 10% of your body weight at a time.

This is just enough to keep your body from fighting back at you with AK47 continuous fire hormones that make you think you are starving to death.

I hear you. BUT HOW?

The key to incremental weight loss is to make tiny but powerful changes.

Instead of listening to Oprah (dude, she wants your money), drink water (like actually enough water, which ranges from the 8X8 rule to the half-your-body-weight rule and even a 2//3 of your body weight rule). Sleep more, move more, eat intuitively and more nutrient dense food, (that is listen to the foods your body enjoys being fueled by and those it does not). See what happens. Chill.

Don’t panic: A. Your weight is just a number. B. Your body knows what it’s doing. C. Oprah sits on a throne of lies.

I can't say your set point will change; what I can say is your body will feel better regardless. And if your set point doesn't budge, don't get pissed. Instead, thank your body for recognizing what you’ve done for it (thanks for the WATER! FINALLY.), and where it’s happy today. Enjoy the benefits of greater mobility and fewer headaches and supple skin and naps. (NAPS4EVER AMEN.)

As for me, I’m basically a human experiment on display. My size hasn’t changed more than a pound or two either direction since early October. Now that Ella is in school and doesn’t need me right there, and now that I’m recovered from my hysterectomy, I’ll go back to the gym (or some similar body moving activity). What will happen to my set point then?

What I do know is that diets don’t work, because your body does. And that’s a gift.

Want to follow my journey? Join in? Cheer me on? Cry with me?

If you like this article, please share it! Your clicks keep us alive!
Tags
BB&A
Beyond Before & After
dieting
eating disorder
ED recovery
body image
Body Positive

Why Raising A Daughter Scares The Sh*t Out Of Me

Black People Get Eating Disorders Too

Anorexia Recovery And Sex: How The Two Go Hand In Hand

Your Childless Friends Are Allowed to Be Tired, Too
Megan J Kaleita