How To Love Something And Also Hold It Accountable, From My Favorite Murder's Biggest Fan

I have 21 tattoos — I think. Every one of my tattoos has meaning. When I say meaning, I don’t mean like “I like flowers," I mean like the most viscerally painful, emotional moments in my life are quite literally etched into my skin forever.

This is one of my favorites. 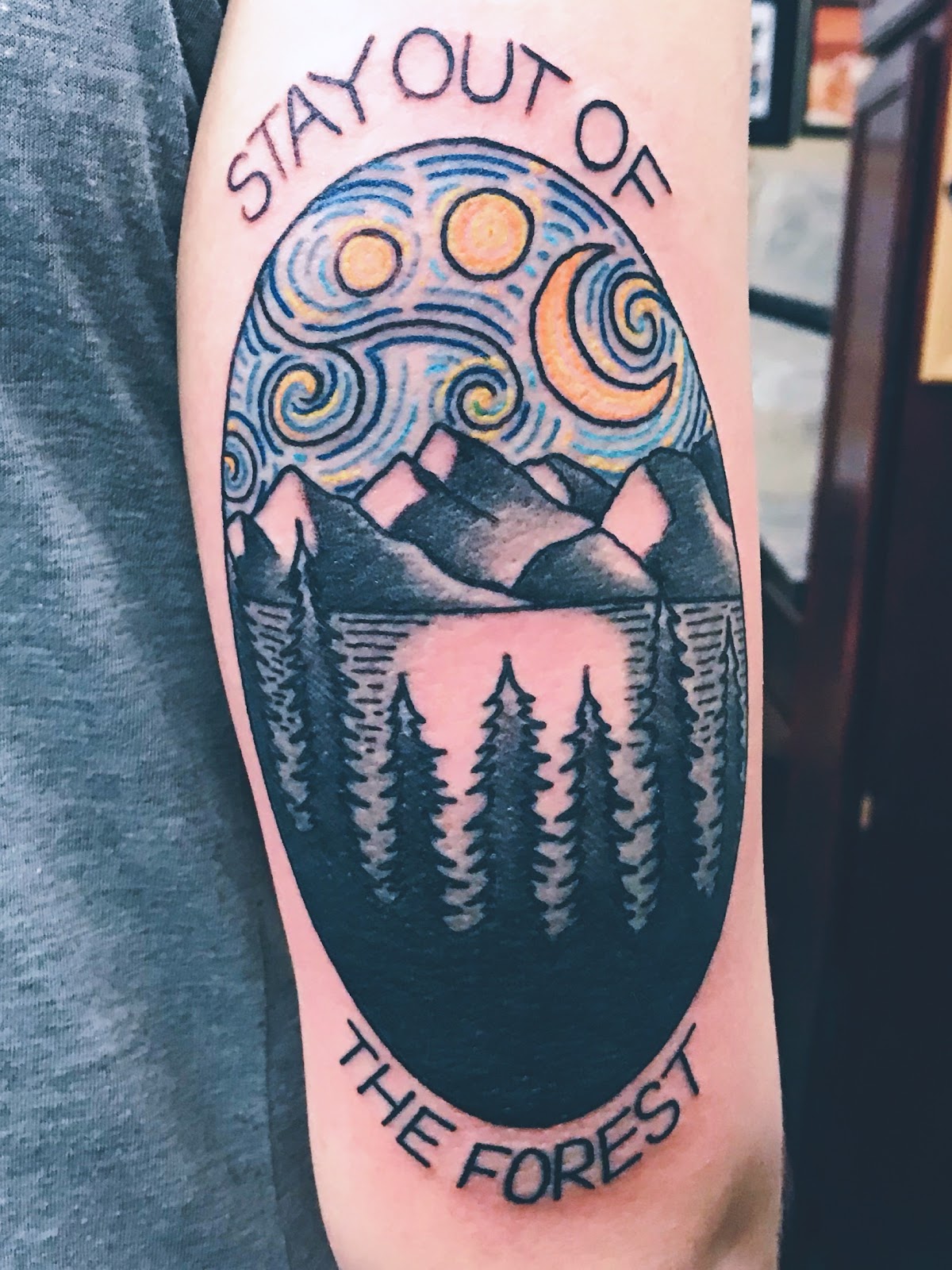 It probably doesn’t look like much to you at first glance. It’s just a forest, some words, a weird artsy looking sky — but I’m going to tell you what it means.

This tattoo is one I share with my eldest daughter. 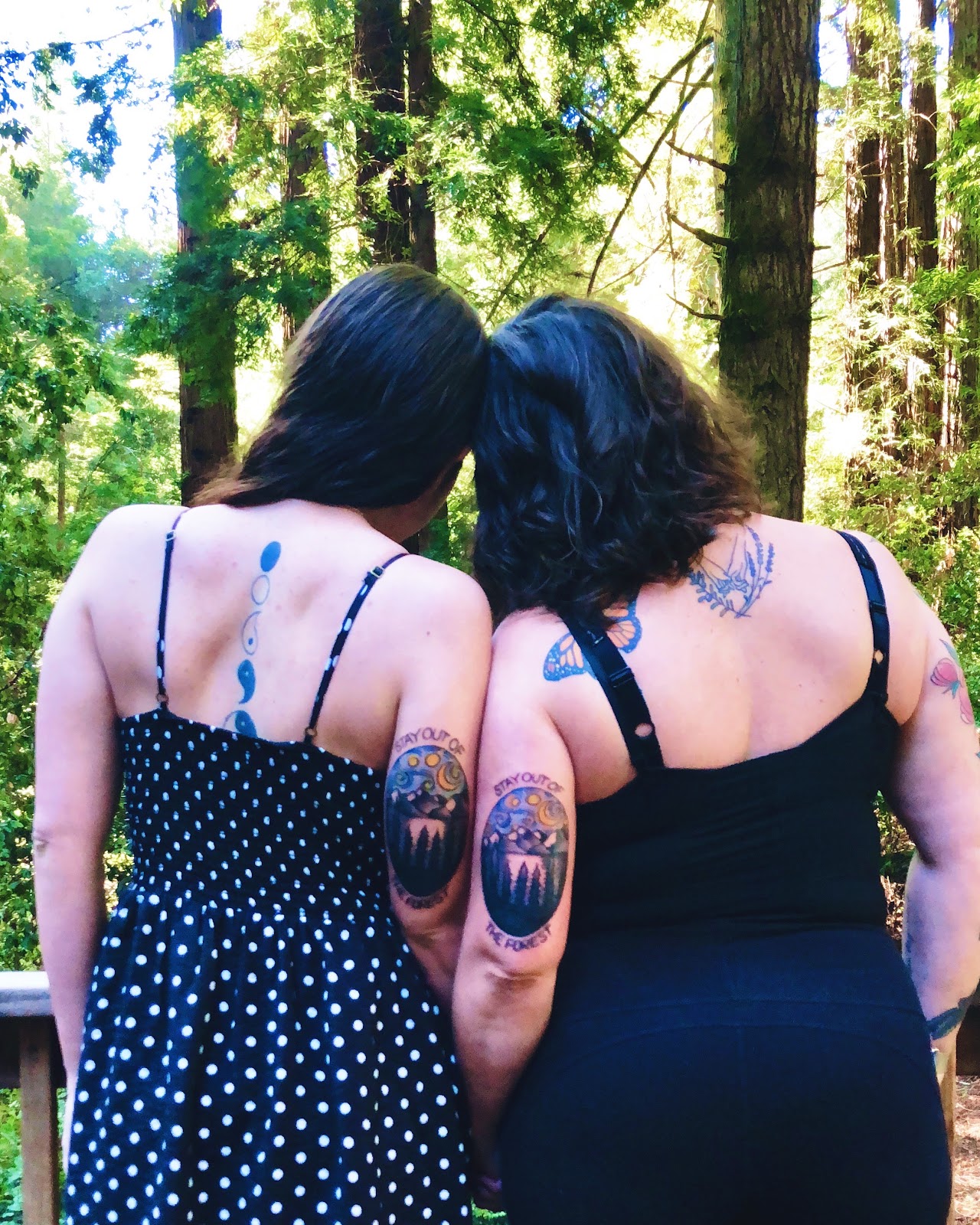 I share a lot of things with her: an affection for cats (especially orange ones), a similar smile (wide and toothy), an astrological sign (Leo4ever), hair (brown, wavy, but not curly), an obsession with true crime (Manson anyone?), and a love of podcasts (My Favorite Murder — I’m a Karen; she’s a Georgia).

I love her more deeply than I can say.

This tattoo is an ode to the podcast we love, the forest I live in, and something even deeper than that.

When she was just 18, I put her on a plane to New York City. She nannied there for a good friend of mine. Something terribly traumatic happened to her. When the thing happened, I booked a flight and went. The rest isn’t for me to tell, but for me to tell you that it was a simultaneously very painful and very meaningful trip. On the last day, she intended to take me to see van Gogh (my bipolar cliche favorite).We realized, as our day came to an end, that MoMA was about to close and Kelsey sent a taxi racing through Manhattan to get me there. The staff let us in without changing us for tickets, and we beelined to the exhibit.

We were the only two people on the floor, aside from the very large man guarding the painting and keeping the strict six-foot perimeter. We approached weeping, and he motioned us up to within fingers reach of the painting.

When Kelsey and I decided to get this tattoo, the van Gogh sky was the final, very meaningful addition. It represents a cheeky love of pop culture and podcasts , murder mystery, and a joyful moment that came as a result of a very painful time.

A couple of weeks ago, I woke to a text from Kelsey saying that she was pretty disappointed in Georgia and Karen. There was a shirt on their merch page that pretty clearly depicted a tipi. 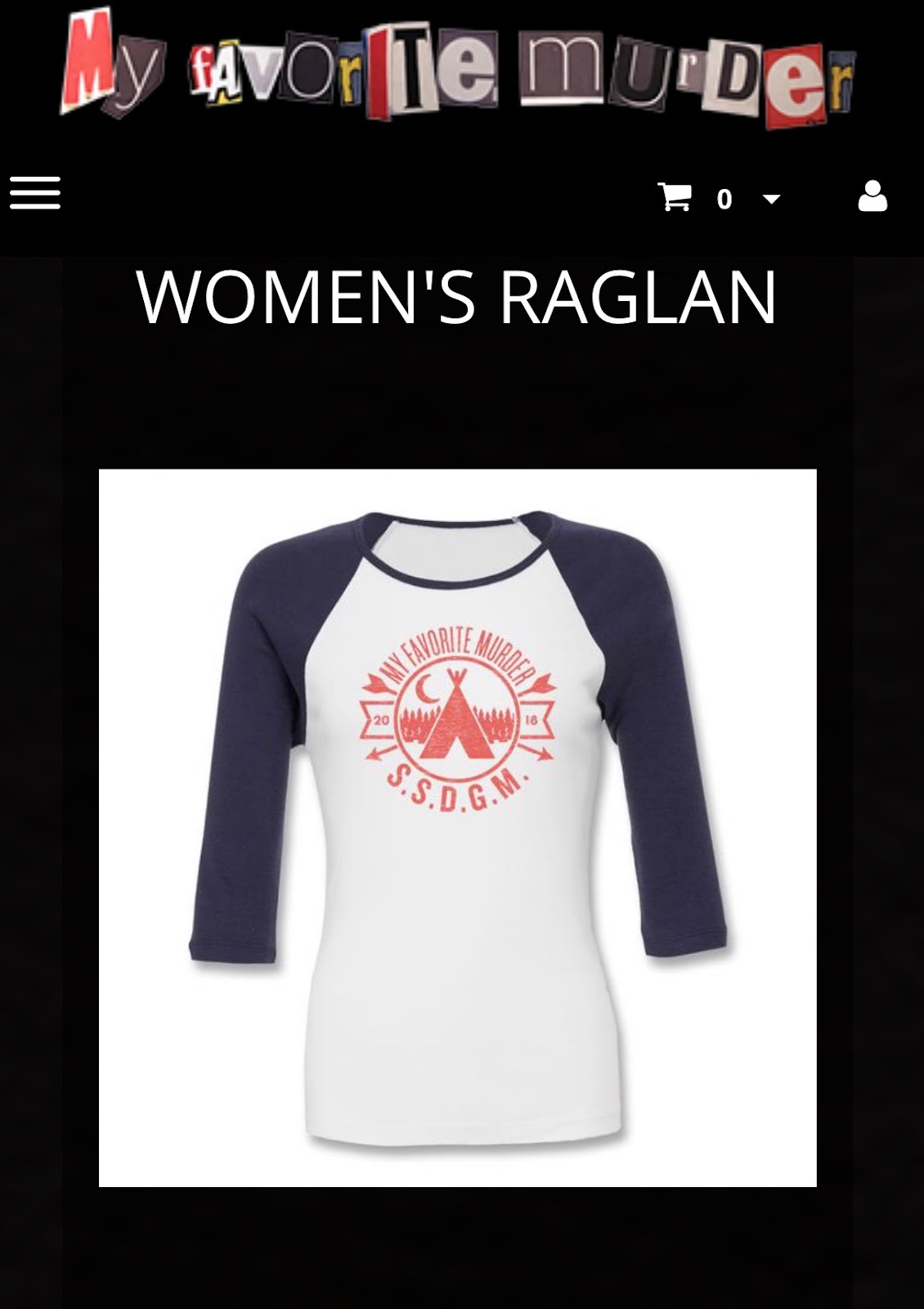 The use of a tipi was, of course, problematic, but the real problem was in their response — none. Well none at first; then excusing the use of a tipi by saying it was supposed to be a tent.

Georgia and Karen are, as far as I know, white women. My Native heritage is pretty well thinned out (my great-grandmother’s grandmother was half Cherokee/half Creek), but even I can tell that’s a tipi. Not all tribes used tipis, but those that do used them as much more than tents. They are sacred spaces made to entwine the everyday with the deeply spiritual.

So… not the sort of thing to slap on a T shirt for the sake of aesthetics.

Folks were understandably upset by the image and then by the subsequent lack of response to the concern. MFM has made it a regular habit of publicly correcting themselves when they screw up, which was why their lack of immediate response to this particular error took folks by surprise I think. Ultimately the shirt was taken down, and Georgia and Karen pledged a $10,000 donation to an Indigenous charity. The problem is that it took two months to get there.

But there are other problems, too.

As a white woman, I am constantly making mistakes that can cause unintentional harm because I was socialized in a white supremacist society. That doesn’t make me a bad person — it just makes me a person in the world navigating a very complicated matrix of privilege and marginalization with roots and reverberations deeper than I could ever imagine.

Karen and Georgia made a mistake — a painfully Caucasian mistake. They should have responded promptly and thoughtfully to this criticism, without qualification. I guess that they were afraid to because we live in a culture that is very quick to “cancel” the things it deems problematic. This discomfort is not comparable to centuries of mass genocide and colonialism for sure, but it still sucks. It feels shitty to realize you were shitty. It is embarrassing and upsetting to realize that no matter how progressive we think we are, we always have internal biases to work on. It does not feel good to have those biases aired out in public, and it’s true that people delight in a good chastising.

But being a responsible human is more important than avoiding discomfort. Always. Especially when it involves taking responsibility for something you did/said/sold/supported that harmed another human. The time to talk about callout culture and the politics of problematic faves is not when you’re being asked to own up to a mistake you made. Owning up to your mistake needs to be the top priority.

One of the reasons people are so quick to cancel public figures is because of just how terrible our culture is at apologizing. On both a structural and interpersonal level, we are quick to make concessions for ourselves, to minimize our harm, to cut down the person — or people — holding us accountable. So we don’t trust each other to apologize and reconcile. It’s time to earn that trust back, and it starts with getting really good at approaching our mistakes with integrity instead of ego.

Those of us with platforms that reach people (and, in the case of MFM, LOTS of people) do have a responsibility to use those platforms wisely and with caution. The bad news is that sometimes we screw it up. The good news is that screwing it up can teach us how to be better, and in turn, teach the readers, listeners, viewers also to be better.

Here is the lesson for us (talking to fellow white folx): screwing up is inevitable, not fixing the screw up is inexcusable.

Here is a handy 4-step guide on how you fix it:

2. Apologize: “I am sorry I screwed up that thing and hurt the people that my screw up impacts.”

3. Make reparations: Take the thing down. Write a correction. Give the money you made on the thing to the people it hurt.

This might be hard — it is hard to look like an idiot publicly — but what is infinitely harder is being the person marginalized, ignored, in pain.

I went to Facebook Live to talk about this. Come join in the conversation!

If you like this article, please share it! Your clicks keep us alive!
Tags
My Favorite Murder
MFM
white privilege
responsible
social justice

What A 90-Year-Old Dementia Patient Taught Me About Privilege

Community, Murder, & Feminism On The Podcast My Favorite Murder

Take The Cake: Do We Support Thin Feminists More Than Fat Feminists?

How Dogmatic Perfectionism Nearly Killed Me