I Regret Circumcising My First Two Sons, So I Didn’t Circumcise The Third

I think it took five or six sticks to place his IV. I lost count after the second try, as I watched tears well in my 17-year-old son’s eyes. He has what medical folks call “valvey veins.” Of my three oldest kids, Owen looks the most like his dad — same long face, same curls of hair at his temples. But the valvey veins? He got those from me.

Owen was in the hospital getting jabbed in his valvey veins six times because he was about to be circumcised. Sort of. He was circumcised as a baby, same as his older brother. But he had a complication I didn’t know was a complication. The skin on the underside of his penis grew back together.

Bodies have a really incredible drive to heal themselves. And Owen’s did. I tried to stop it from healing itself. The pediatrician told me to pull the freshly healed skin apart and keep it lubricated.

Have you ever tried to pull healed skin apart on an infant or toddler?

Despite my efforts, his foreskin won the battle. The pediatrician said it was “no big deal.” He said that when Owen grew up and began to have regular erections or became sexually active, the skin would pull itself apart. But it didn’t.

So there we were, in the hospital. Him crying as they poked hm over and over. Me crying because, at the root of it, it was my fault.

Owen came out of surgery groggy and holding the newly cut, very sore part of himself. 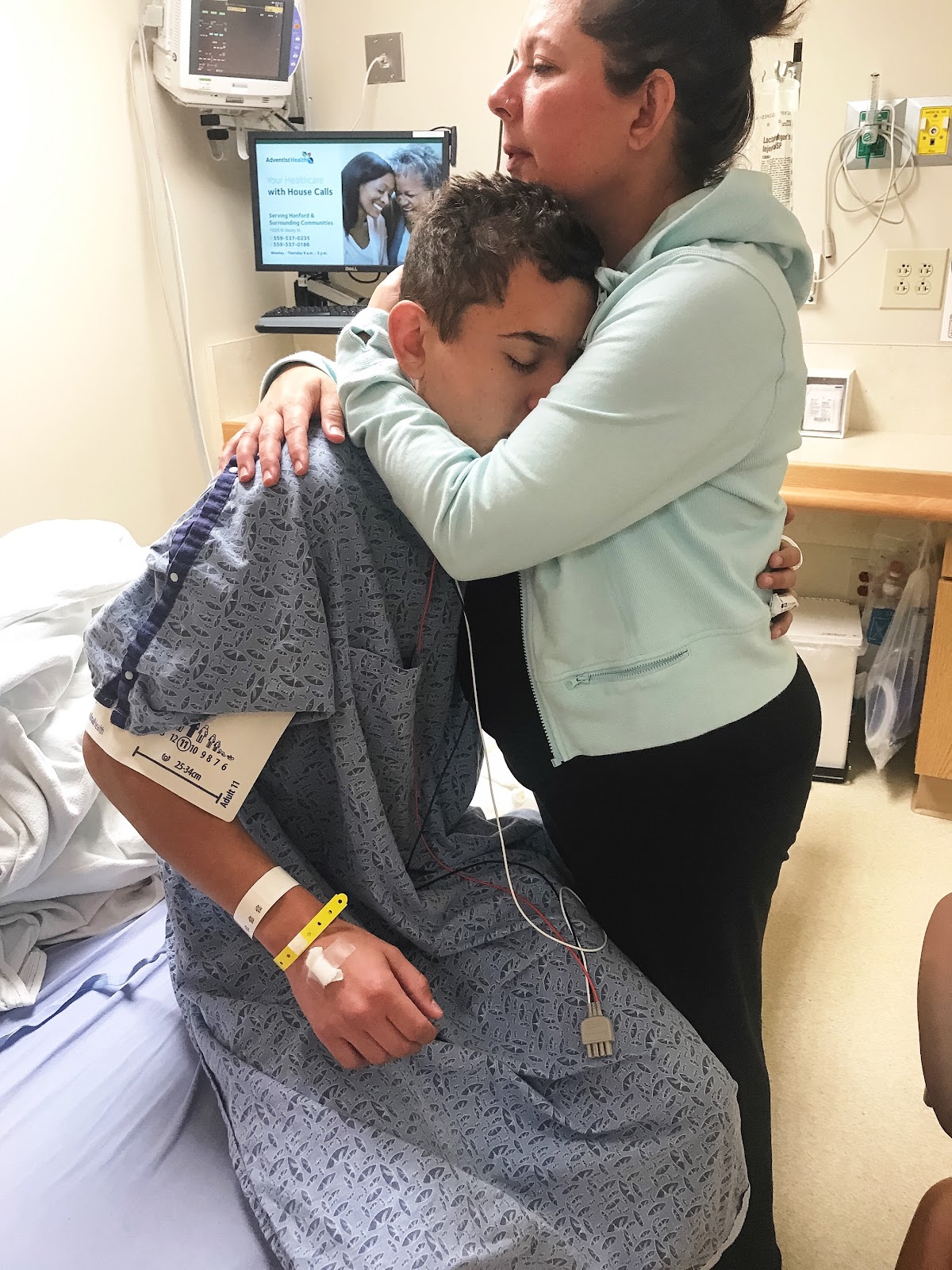 This is a photo my daughter snapped of me holding him while he tried to stand up and use the bathroom.

Because of a procedure that would have been totally unnecessary if I had just left his penis alone in the first place.

I didn’t leave it alone though because his father said he should look like him, and my father said, “You’re not going to let him go through life wearing a turtleneck, are you?” Our pediatrician said it reduced the risk of cancer and the risk of UTI and was recommended. Most people in the nineties were circumcising their babies. I was most people.

He cried when they cut him. I heard it from the waiting room. They used an anesthetic, but he cried anyway. When they were done, I held him and cried with him and said I was sorry.

When he came out of surgery seventeen-and-a-half years later, I held him and cried with him and said I was sorry.

I am so sorry.

He’s fine now. Everything looks like it should and functions like it should. But I cannot escape the reality that all of this was completely avoidable.

When I remarried ten years later and became pregnant, I approached the topic before we knew the sex of the baby. I made a plan to tell him about Owen and how much I regretted having cut him in the first place. Men so often want their sons to “look like them.” My husband is circumcised. I worried he would insist any son we have be as well.

His reply was direct and immediate, “No. We aren’t circumcising any baby we have. That’s torture. Also, it’s not our penis to cut.”

My pregnancy went along mostly as planned (except for the part where my pelvis started to come literally APART). I carried 10+ pounds of Max to term (and beyond) miserably. We labored at home with the intention to birth there as well, but when I’d been in labor more than 24 hours, we transferred to the hospital. When he finally was born, after an eternity of labor, he slid out with none of the fanfare you’d expect from someone that made you wait days in agony to meet them.

I spent my pregnancy taking care of myself the best I could. I ate wonderful food. I labored naturally in the water. He was born in a dimly lit room with just my midwife and one nurse present. I held him to my chest skin-to-skin for hours. Why would I want to try so hard to make his entry into the world so peaceful, only to disrupt that peace with a scalpel?

After his birth, there was no discussion of circumcision. Not even our pediatrician mentioned it. I hope that’s an indication of rates dropping.

Because circumcision rates are going down, but not fast enough.

In 2013, The Centers For Disease Control and Prevention (CDC) reported that hospital circumcision rates declined in the United States: from 64.5% in 1979 to 58.3% . That’s still more than half of babies born with penises. The data isn’t available yet, but I’d be willing to bet that number has dropped exponentially in the last five years.

It’s a hard decision for lots of folks. We see statistics that show reduced rates of cancer and some STIs, HIV transmission, UTI. People generally believe it’s cleaner (which is only true if you don’t clean it).

And then we see possible risks:

And, with any surgical procedure where there is blood loss, there is a risk of death.

Where there is risk of death, I do not tread.

I agonized over the decision with my first two boys, but it wasn’t a hard decision for me when I had my third son. Circumcision was not on the table as an option. Max's body belongs to him. It's not my penis to cut.

For Owen's sake, I wish I had been brave enough to say that 18 years ago.

On Fear And Bliss: Homebirth And The Human Experience

My Labor And Birth Didn't Go As Planned — And No, I'm Not 'Over' It

On Fear And Bliss: Homebirth And The Human Experience

If you like this article, please share it! Your clicks keep us alive!
Tags
circumcision
baby
labor
homebirth
circumcision risks
intactivism

12 Real-Life Baby Announcements We've All Been Yearning To See

This Is Not How Nurses Treat Babies

Did You "Fail" At Breastfeeding? It Might Have Contributed To Your Postpartum Depression

Why Do We Need Black Breastfeeding Week?