Things Men Need To Stop Saying To Women In Bed

Yes, men, even woke men, still say the most unbelievable things to us in bed. 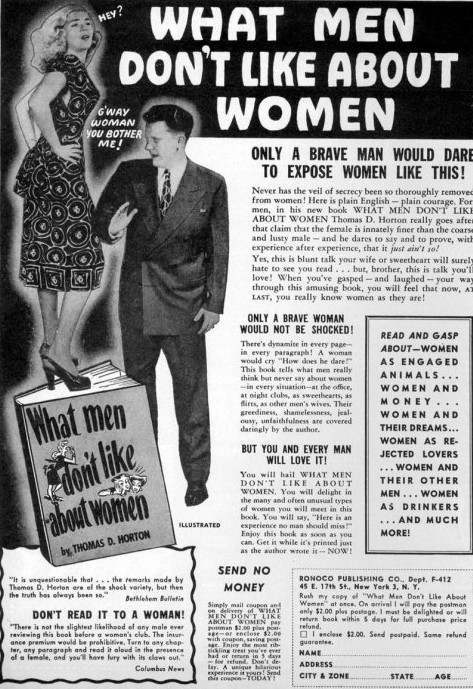 What Men Don’t Like About Women, is a 1945 self-help book for lonely ladies in want of manly men. The author, Thomas Horton, is a kind enough misogynist to elucidate all our faults (many and sundry) and failings (endless and specific) so that we may better serve the fragile egos and tenuous erections of boyfriends and husbands. In “Chapter Nineteen: Women in Bed and the Morning After,” he tells us, “It is relatively astounding how many truly decent women all lose control of their mouths and minds when they jump in bed beside a man. But it is not at all astounding that most men don’t like it at all. They want reticence, soft, still, inner music, speechlessness, mad oblivion.”

Ahh, but passé referred initially to women past the age of their most magnificent beauty. Past tense desirability. Past worth as a commodity on the fuckability market.

Drop the “baby,” and I’ll agree that we have come a long way from days of yore when we were meant to be barefoot, pregnant, indentured servants with nary a clue we had a pearl of pleasure inside our rose petals. We can smoke (though maybe not so much in public anymore), pursue careers, have some say in our reproductive rights, no longer need a husband’s signature to buy a home and get a credit card (which can be now used to purchase an array of colorful, many shapes, sizes, and speeds vibrators and dildos and butt plugs which we can use all on our own, thank you very much. Remember those long-ago doctors who, in trying to relieve our hysteria, grew fatigued and finger-cramped because it took us too long to orgasm under their inept, clinical ministrations?

But here’s the thing: all that bile spewed by Thomas Horton in 1945? Not much has changed in the way men objectify our parts, or expect us to perform, or how they value us in bed. In fact, research proves that while men (and women) see women’s bodies as disconnected “parts" — boobs, ass, mouth, legs, pussy, clit — women see men’s bodies as whole, that is, as connected to their full person.

Yes, men, even woke men, still say the most unbelievable shit to us in bed and most of the time, we don’t say anything back. Perhaps we are shocked, wondering if we heard right in the tepid heat of the moment? You said Phat not fat, right? Perhaps we can’t speak because your dick is in our mouth? Perhaps, and this feels like the rightest reason (for me anyway), we feel shame because what you are saying about our parts, our performance, and our value might be true, or feels true and allied with our insecurities. Our silence is default agreement, and in reverse bloom, we close into a tight bud of shame. We carry your assessment forward into all our future fucking: too jiggly, too thin, too fat, too small, too large, too smelly, too boring, too quiet, too noisy, too stupid, too smart, too too to fuck.

Anecdotal evidence suggests that women don’t generally offer a derogatory play-by-play in bed. Maybe because we seem to be easily satisfied and astonished if a man’s fingers or mouth land near-ish our clitoris (woke!), i.e., between our belly button and our ass. I very very briefly dated a guy who treated my vagina and clit as a No-Fly Zone (no fingers or mouth ever flew south of the equator), so sometimes I feel grateful for lowball slipshod attempts. Nothing ventured, nothing gained… really, nothing gained.

Actual comments by actual partners of mine while in the middle of actual fucking on parts, performance, and value? (In full knowledge of my recovery from anorexia):

I’ve spent more time than I should wondering if what these men said was true, but I’ve decided that they don’t know what they’re talking about when it comes to my body, my desirability, and my worth.

I wondered what shit has been said to you in bed by men and what you wish you’d said back. This is what you told me in your necessary fury and power:

“Many women, alas, are not as clean in bed as they should be. Longer and more frequent washing would please more men than they imagine... There is little delight for the man in seeing his beloved squeeze herself into her girdle or pour her dress over herself,” — What Men Don’t Like About Women, Thomas Horton

“There are few things in this world that offend a man more than to be directed in the sex act by his woman. It is pretty near the ultimate humiliation, beyond the forgetting and forgiving. Nature demands that the man be dominant in bed, if nowhere else.”— What Men Don’t Like About Women, Thomas Horton

“More pretentious women seem to think… that the natural follow-up of a time in bed is the discussion of the works of Shakespeare, John Steinbeck, Van Gogh, Faulkner, and Marcel Proust. They also assume that since they are in a state of nature with a man, they are his intellectual equal. So they blab and blab, taxing a man’s patience to no end. What he really wants are quiet rest and sleep.”— What Men Don’t Like About Women, Thomas Horton

We’ve come a long way, baby, but men have not.

Anorexia Recovery And Sex: How The Two Go Hand In Hand

Stop Making Married Moms Feel Bad About Not Having Sex

I Hate Romantic Comedies, So Why Do They Matter?

I Was Med Shamed By The Only Psychiatrist In Town

Men Who Want Sex With Fat Women But Won't Date Them

Voice Lessons: Why I Speak Without Raising My Hand
Kerry Neville