I'm answering all of those early pregnancy questions so you can stop Googling!

It's your fifth pregnancy, and you’re worried. You’re worried about all of those things all over again.

Because that’s what pregnancy is. It’s a magical, mystical period of life wherein the most benign symptom or action becomes suddenly fatal.

I’ve been pregnant six times, and every time I was worried about all of that, plus something new.

The first trimester is particularly troubling, in the absence of feeling baby kicks and the 20-week ultrasound that will offer a glimpse into the unknown, anything and everything can go wrong (or so we think).

Let’s address some of the most typical early pregnancy questions:

1. What does the first trimester of pregnancy feel like?

Honestly, it often feels a bit like the flu, except with sore boobs and crying.

You’re so tired you might want to sleep standing up. You may not want to eat. You may just generally feel under the weather. Hormones are flooding your body. It’s a lot to handle.

I cried when I couldn’t decide what to eat. I cried when I heard the Katie Perry song “Firework.” I cried a lot, and when I wasn’t crying, I was just exhausted.

Sleep whenever you can. Literally anytime.

3. What are my chances of miscarriage?

This is usually the overwhelming fear, so let’s break it down.

Once you’ve heard a heartbeat, chances of miscarriage breakdown like this:

These numbers can vary greatly depending on your individual medical history, your age, the father's age, morning sickness (more can = higher HCG which is good, sorry), and fetal heart rate (at six weeks two days, heart rate of <80 ends in miscarriage 100% of the time, compared to 11% for babies with a heart rate of >100).

And yes, as they say, once you’ve cleared the first trimester, your rate of miscarriage drops to less than 1%.

If that didn’t make you feel better, I’m sorry. I didn’t expect it would, but this is about answering questions, and that’s the one most people ask.

4. Okay, but are cramps in the first trimester normal? Because I have them.

Cramps can mean a few things! Implantation can cause cramping!

The stretching of the uterus and ligaments can cause cramping! Cramping does not mean you are miscarrying. In the absence of bleeding, cramping isn’t abnormal.

5. But I’m in my first trimester and I’m bleeding.

Okay, fair to be a little worried if you’re bleeding.

BUT, bleeding happens during implantation all the time. Usually this blood isn’t brand new, so by the time you see it, it’s brown-ish.

Some people have bleeding just like a period. I did! If I had actually known I was pregnant with my third child, I would have been terrified. I had a full period!! (More on that kid below.)

Bright red bleeding that soaks a pad in an hour is something to call your care provider about.

6. Okay, but I have weird discharge that isn’t blood.

7. I am so stressed at all the time; can stress cause a miscarriage?

Highly unlikely. Like almost impossible. But stress is bad for you, so try to fix that.

8. Morning sickness. When should it start?

Morning sickness usually strikes around six weeks, give or take. About 50% of women will feel like hurling for at least some part of their pregnancy.

And not always in the morning; I was sick all dang day.

9. But what if I DON’T have morning sickness?

That’s OK! I didn’t even know I was pregnant with my third baby until the tail end of my first trimester. I was barely nauseated and even then only when it was hot (it was 110 degrees).

There are cultures that don’t experience morning sickness at all.

10. I have morning sickness so bad I can’t even look at food; is my baby going to die?

That happens. The good news is, your baby is going to be fine. Because babies will suck the life right out of you before they will suffer.

The bad news is, the baby is sucking the life out of you (figuratively, but still).

That said, if you can’t keep even water down, you need to head to the ER for some fluids.

11. What should I eat in pregnancy?

Protein is essential (it’s important for your body, but it also can keep morning sickness at bay). Eat that. Fruits and veggies of course.

BUT if nothing sounds good at all, or you can only eat french fries and bananas, go ahead and eat them.

That baby is 22, and she’s totally normal.

12. I HAVE DIARRHEA? Am I miscarrying?

Stomach cramps and diarrhea can be associated with miscarriage, but usually later. Diarrhea can happen in folks with high progesterone.

Diarrhea can also happen around implantation! Who knew? (Bleeding too, we’ll get to that).

While constipation is the norm, it is not the only way to poop. Don’t panic. Stay hydrated and call the doc if it goes on for more than a day.

13. What can I do? Can I fly in early pregnancy? Can I take a bath? Can I get my nails done when I’m pregnant?

You can’t have raw fish, which, if you love sushi, really sucks. But you can do most things. Including fly and take a bath. But avoid the spa or sauna. You don’t want your body temp elevated too long.

14. OMG CRAP. I WAS IN THE SAUNA ONCE WHEN I WAS SIX WEEKS. IS MY BABY GOING TO DIE?

There are a number of reasons your belly may be poppin' in the first tri. Have you been pregnant before? Uteruses that have been stretched out like to go right back from here they came. 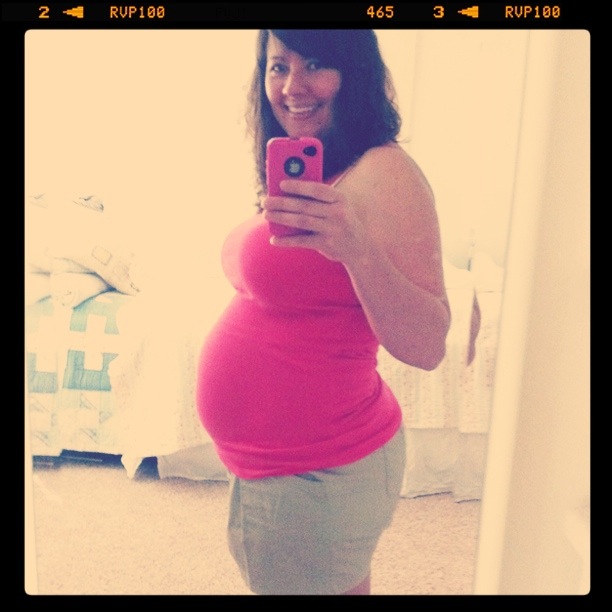 That’s me ten weeks pregnant with my sixth baby.

16. Is it normal to hate being pregnant?

I don’t feel like I’m “glowing” or anything. I don’t even want to get up in the morning. I’m second guessing this whole thing.

Creating human life is a nightmare sometimes. Your baby doesn’t know (or care) if you hate being pregnant. Television makes you think you’re supposed to feel all radiant and ethereal. That’s a load of bull.

What Not To Ask A Newly Adoptive Parent

My Most Sexually Empowering Choice? Not Having Sex